I managed to track down a few of my favourite birds this year. The Redstart, Pied and Spotted Flycatchers. The first two were located on the edge of , whilst the Spotted Flycatcher (which had evaded me all year) turned up unexpectedly at Roding Valley Meadows in Loughton, Essex, on a trip to my parents. It gave good views for the two days I was there. Unfortunately the Redstart would not come down to a nice height for me, so this shot is from underneath it and through the trees, which is not the best angle to view this colourful bird. I hope to do better next Spring. 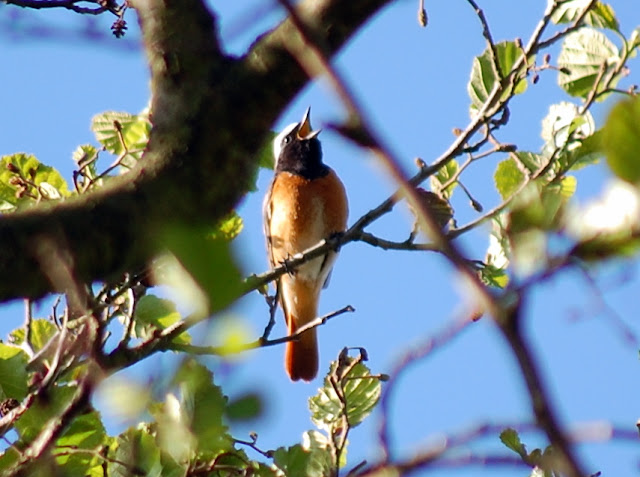 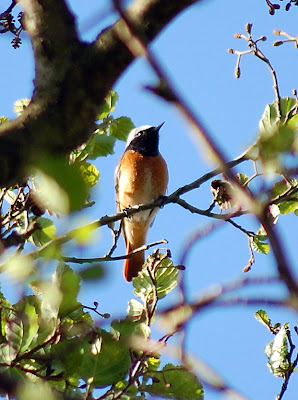 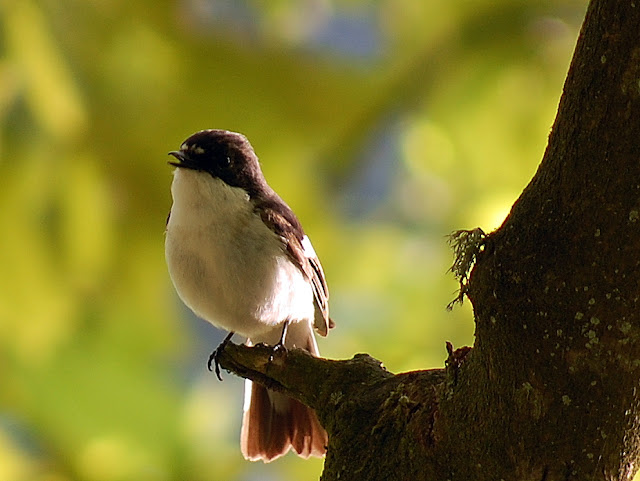 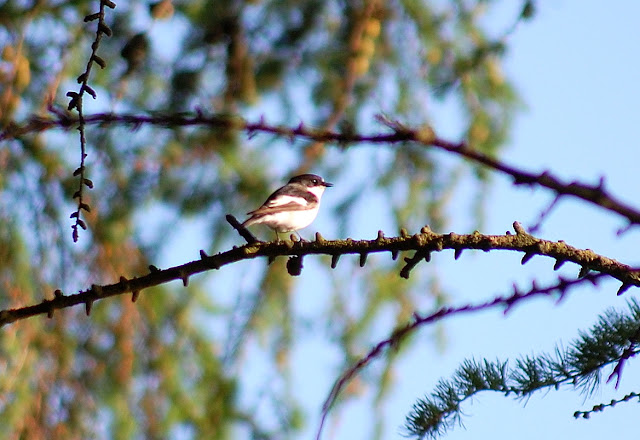 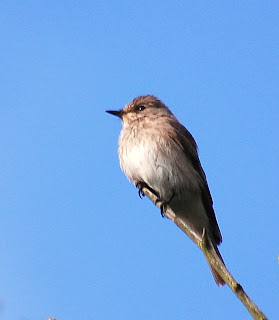 Sandpipers of all varieties were seen throughout the summer. Although sadly, the one I wanted (Wood Sandpiper) escaped me, as I missed it on several occasions in Altrincham.
Green Sandpipers were plentiful at Pennington Flash, Leigh, as was the Common Sandpiper. A less common variety that I did manage to see was the Curlew Sandpiper.
My Waterbird/Wader highlight was probably the Avocet. Quite common on East coastal sites of the UK, but the one I saw was inland in Greater Manchester. Running the Avocet close, was the Water Rail I saw in the Lea Valley with my Dad. It gave great views dashing through the reed beds. Sadly I didn’t get any good shots of either, but here are some of the Green Sandpipers. 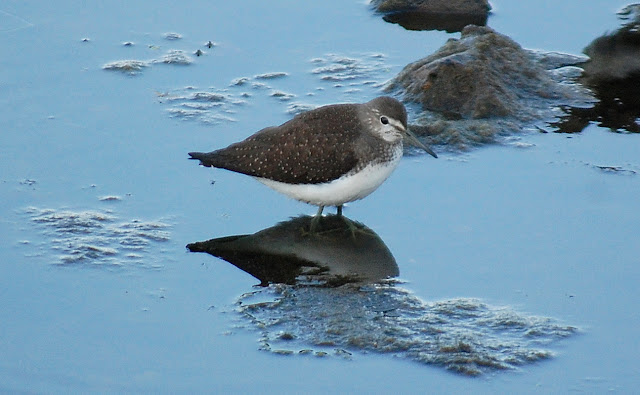 These three weren't a crowd for me. 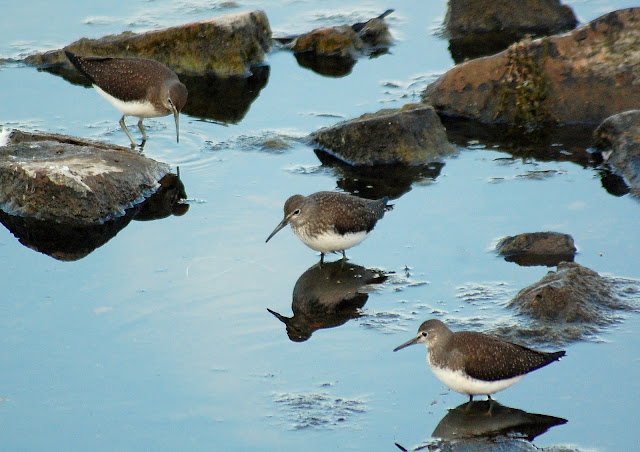 A nice shot with wings spread. 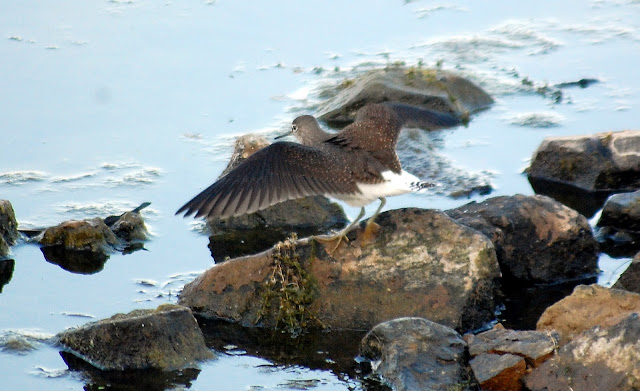 Approaching the end of the year, I thought I'd try and pick out my birding highlights of the last 12 months. There have been many this year in a list of 138 different species seen.


In no particular order, here we go. The year started well with an invasion of Waxwings from . I was fortunate to see some on four separate occasions from to Macclesfield. Listen for the trill that these birds make. It’s quite unmistakeable.
As Spring and Summer arrived so did our migrant birds, and as luck would have it so did a Wood Warbler, not far from my house in Carrs Wood, Bramhall. A fantastic bird, gave brilliant views for several weeks. A real delight, and a first for me.

My first encounter with Waxwings came in Wilmslow, where this shot was taken. 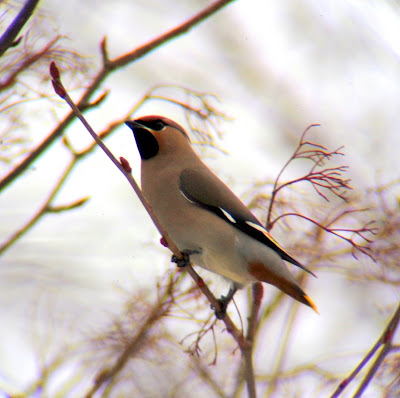 I liked this shot in black and white. These Waxwings were seen in Edgley, Stockport. 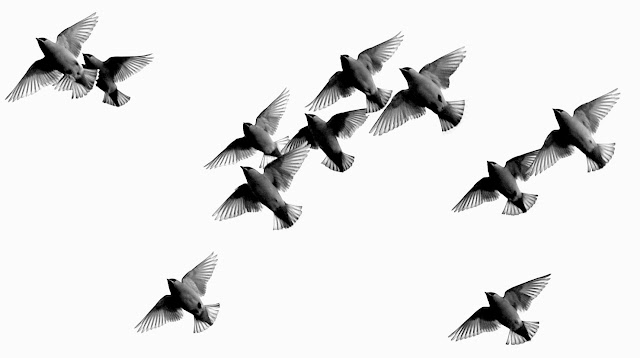 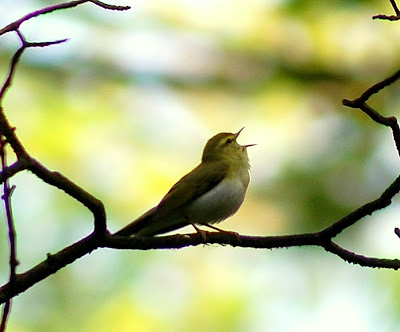 Wood Warbler again. This time getting ready to sing. 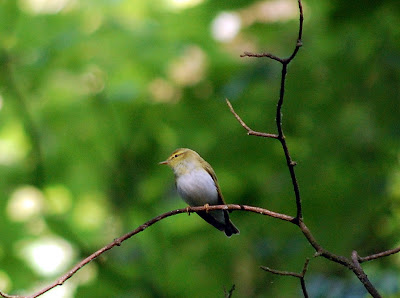 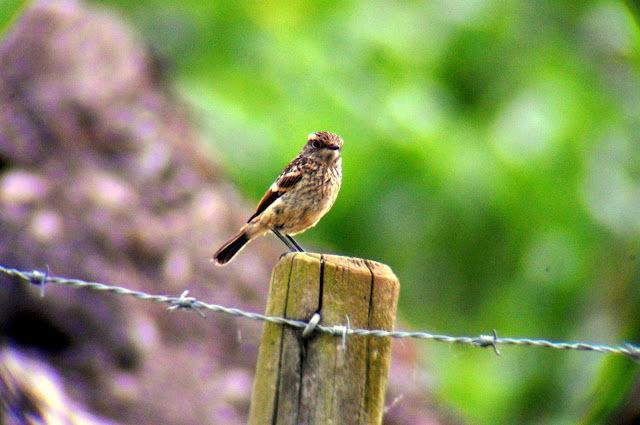 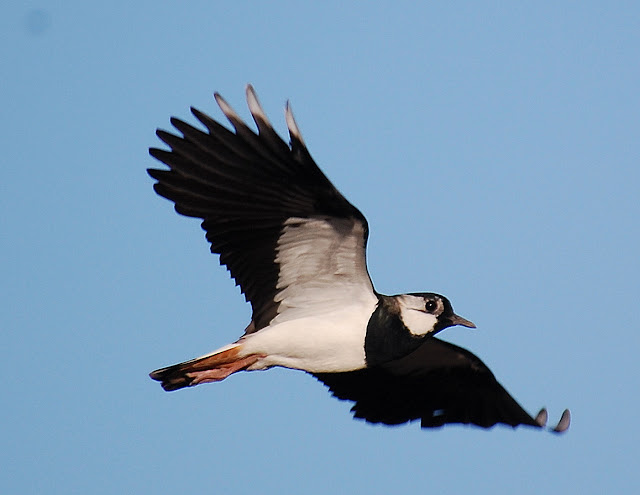 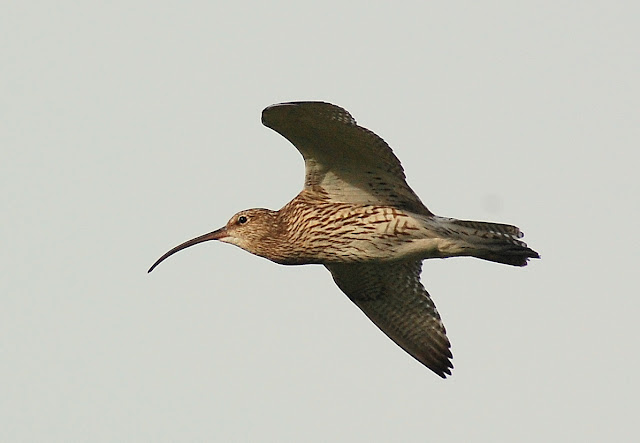 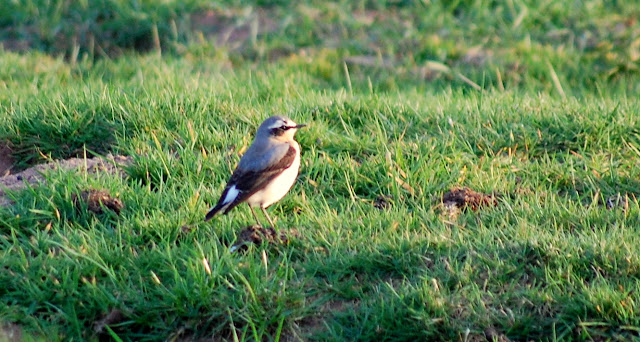 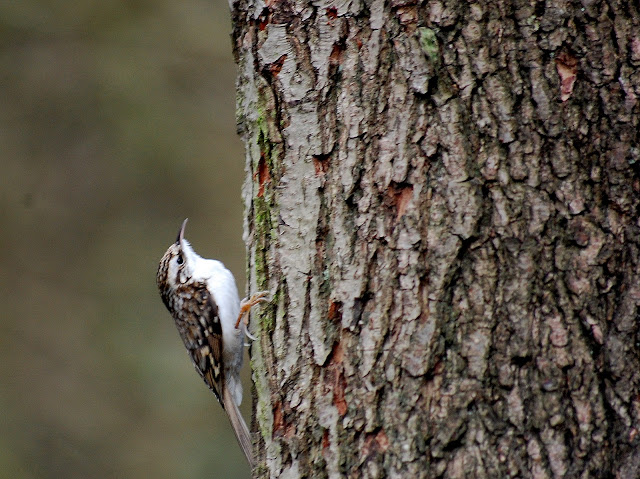 (and the birds need feeding)

We were greeted by the first snow of the winter this morning. Which can only mean one thing in my garden. Quick, feed the birds!
Food went down pretty sharpish and we were soon visited by the regular Cheadle Hulme birds.
Blue, Great and Coal Tit, House Sparrow, Robin, Dunnock, Blackbirds, Collard Doves, Wood Pigeona, Magpies, Starlings and a Rook.
I'd really like a Sparrowhawk to come down and take one of the feral Pigeons that seem to be around, but I am sure I won't be that lucky. Here's hoping though.

Go on, you know you want to. 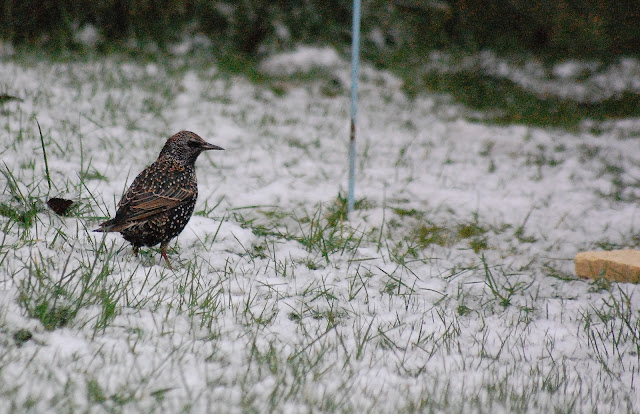 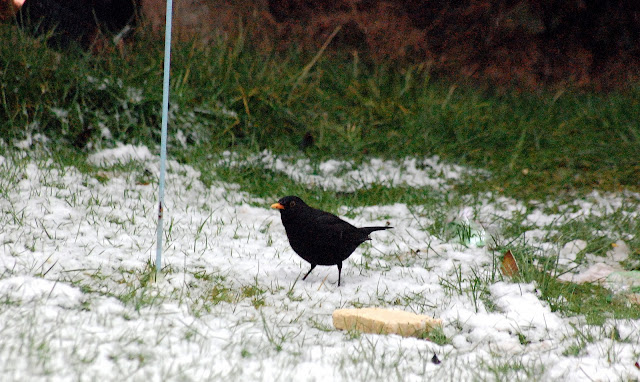 I can see you. 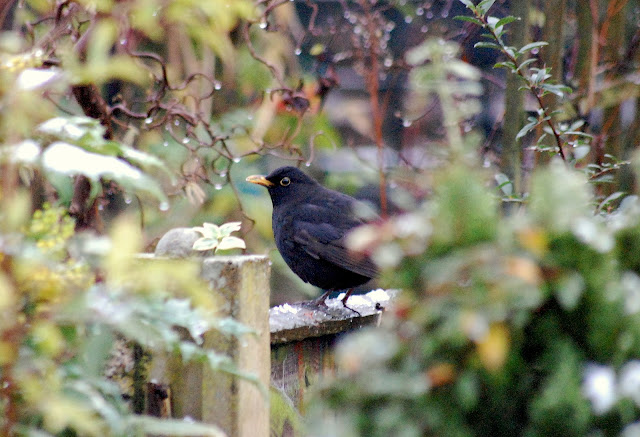 I thought I'd start my first entry at Martin Mere, an amazing wildfowl and wetland centre in Lancashire. At this time of year especially, it is teeming with thousands of swans and geese. It's a great day out, with lots of birds to be seen at all times.  There are plenty of hides along well laid out paths, and feeding stations too. Here you will find the usual finches and tit flocks. A Kingfisher can regularly be seen, and on the day I went, there was a Red Kite and two Marsh Harriers. Two great birds to see in flight.

Below are some of my photos from my day at Martin Mere in September. Some of these are captively bred, but they are still quite nice shots.


This Red Crested Pochard posed nicely for me.

This male Common Eidur Duck was constantly preening and splashing. 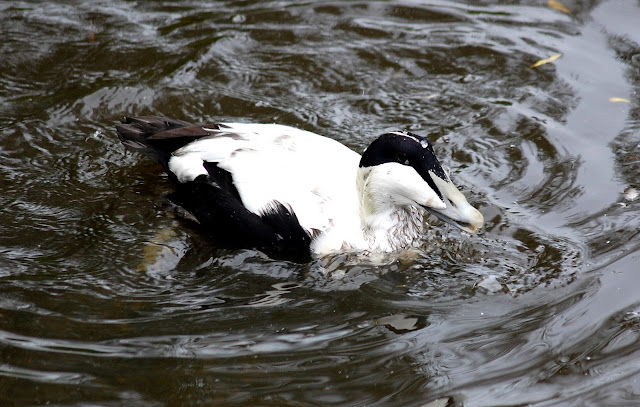 Here we have two Pink Footed Geese either side of a Barnacle Goose.

Here you can see the numbers that were starting to build up in September.

And finally, a Whooper Swan. 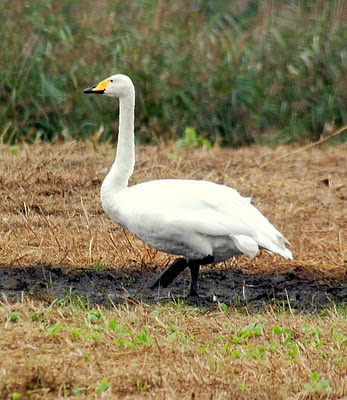