I spent a nice long weekend in Scotland last weekend, staying in Dumfries and Galloway. It was a good base to explore some of the tremendous sites on the Scottish south west coast. The main attraction and spectacle are the geese. Large numbers of Barnacle Geese winter here, and it was nice to be able to watch them on mudflats, fields, marsh and in flight. In fact they were everywhere. Considering I'd never really seen wild flocks on this scale before, it was a real joy. 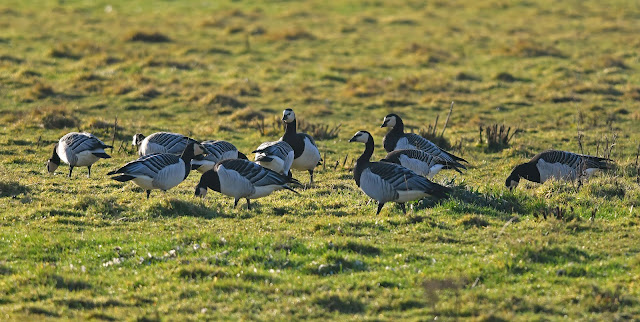 On the shoreline at Caresthorn there were waders, gulls and yes, more geese. We picked up some good birds here in the form of Dunlin, Bar-tailed Godwits, Ringed Plover, Whimbrel, Curlew, Oystercatcher and Pintail. A great little spot where you just had to stand and wait and look through the scope. Great birding.
Dunlin 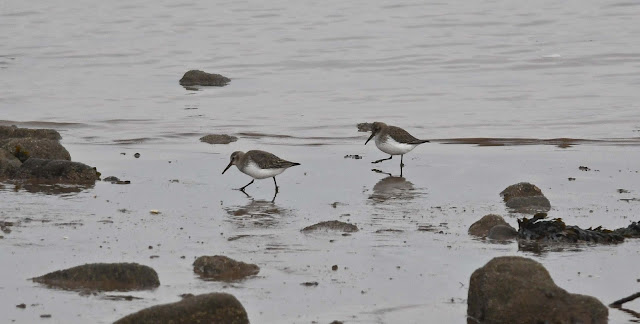 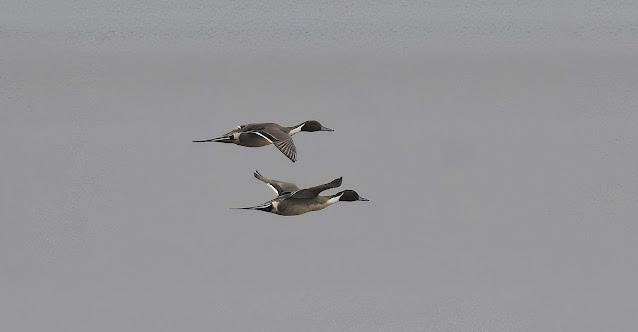 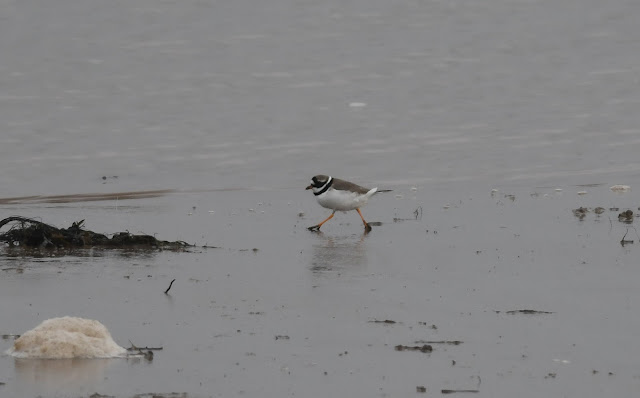 We spent a morning at Calaverock wildfowl and wetland reserve and added some more great birds. Tree Sparrow and Yellowhammers were found in the hedges, with Shoveler, Wigeon, Teal, Snipe and Whooper Swan found on the first pool. We moved on to a different hide and watched a super looking male Hen Harrier hunt over some marsh. Fields were full of Barnacle geese once again, but also joined by Lapwings. We were able to add White Fronted Geese, Ring-necked Duck, Lesser Scaup, Peregrine, Rock Pipit, Golden Plover and Red Kite to the list at various other locations. A fantastic few days, and somewhere I'd really like to go back to next winter.
Whooper Swan 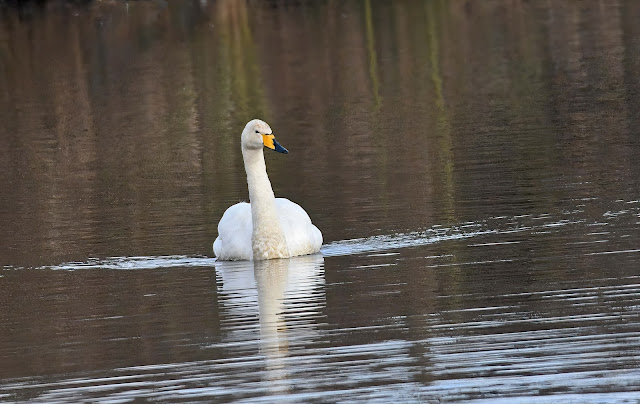 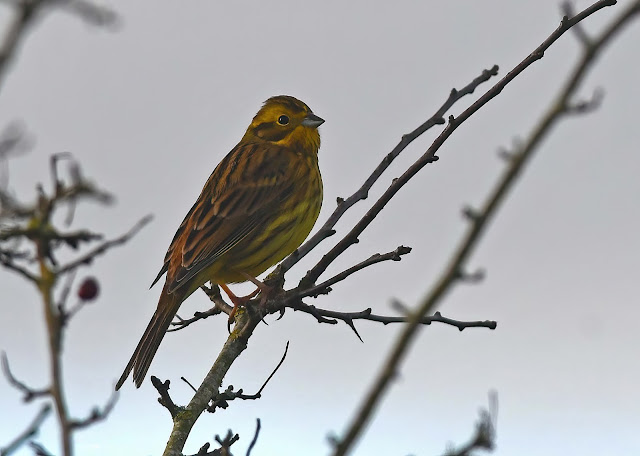 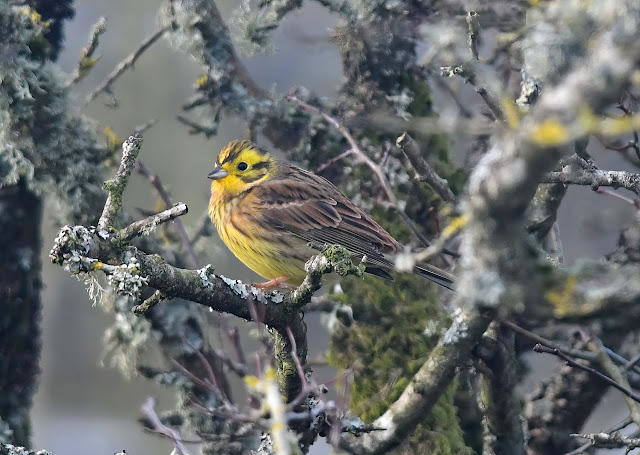 I didn't expect to be adding Glossy Ibis to my year list this year, so was surprised to hear of one just 5 minutes down the road from where I live. This meant taking an early lunch to go and take a look. It was well worth it.

It was cold and frosty, but there was sunlight, which has been sadly lacking of late. This bird was busy foraging in the hedge-lined field. These hedges also gave it protection from disturbance. All my photos were taken through gaps in the hedge. It looks settled, so hopefully stays for a while. This made it species 90 for the year so far. I dare say I'll get an easier one. 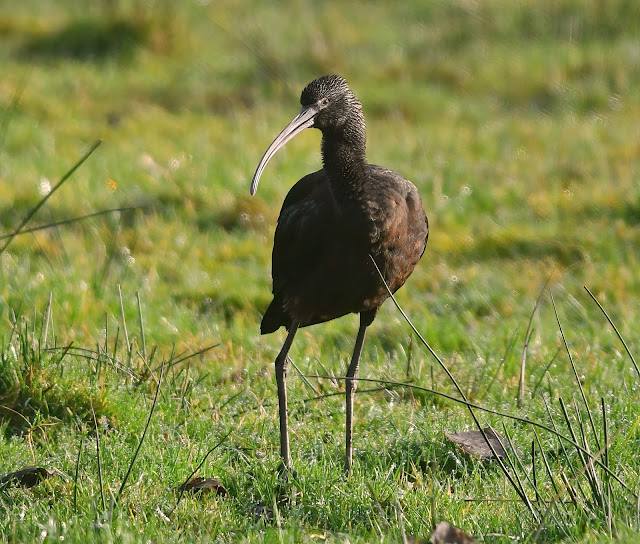 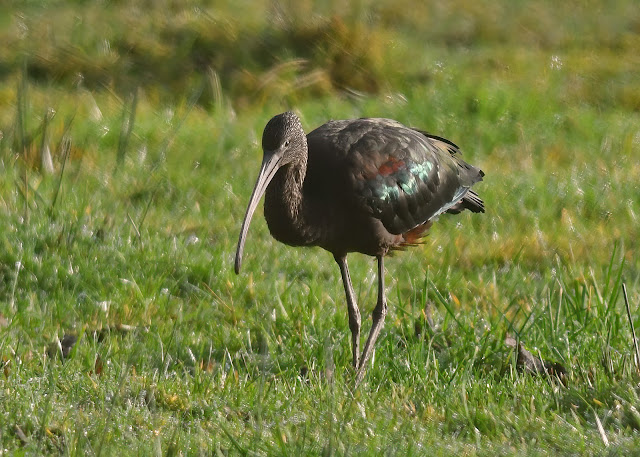 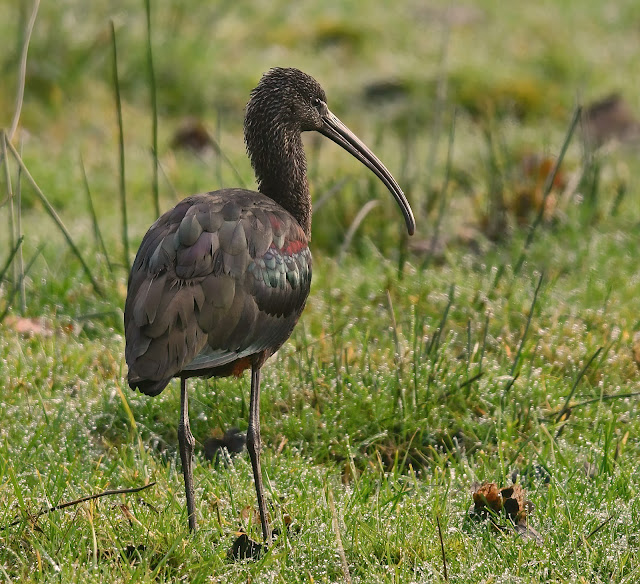 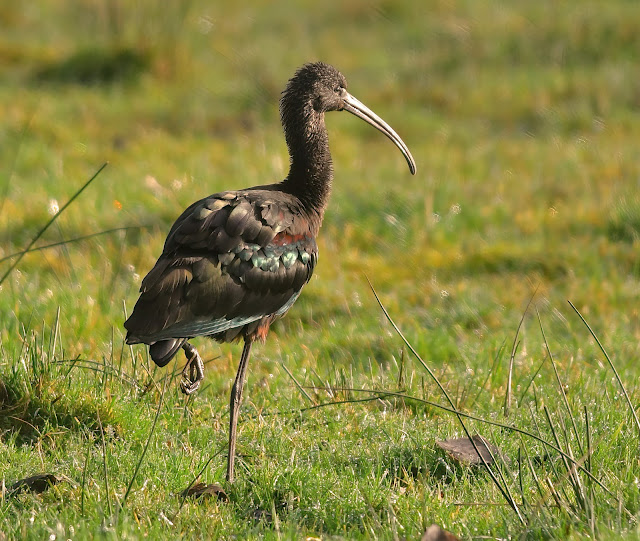 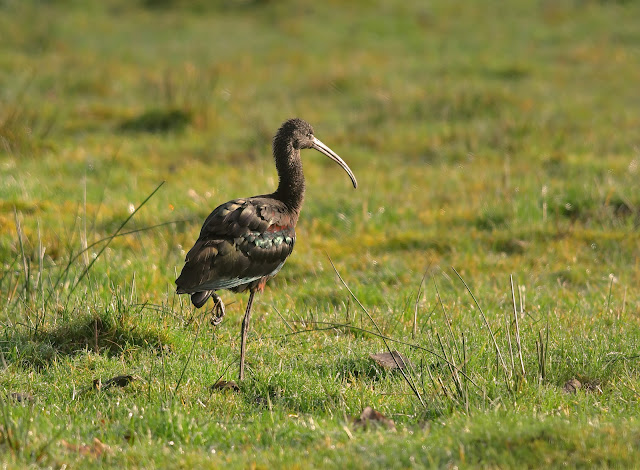 Happy New Birding Year to you all. Thank you once again for all your comments. They do mean so much, and remind me that people are actually looking and enjoying the posts I put on here. I hope to bring you lots more this year.

I started the year off nice and early. Well as early as the sun would allow. It's the worst thing about the winter months for me. I much prefer to be out at 5am and get a good few hours in before the world wakes up. Hey ho, roll on Summer. There were some really good birds around too, and lots of them quite local. That said, I headed to the Wirral to give the new year list a real boost. I started at Shotwick to tick a fairly long staying Long-tailed Duck. It's usually a bird I have to make a special effort for each year, so thought I'd get it out of the way early.

I found it fairly quickly, on what was quite a substantial bit of water. On my way back to the car, I was escorted by a pair of Stonechats. Cracking little birds, and always a joy to see them. 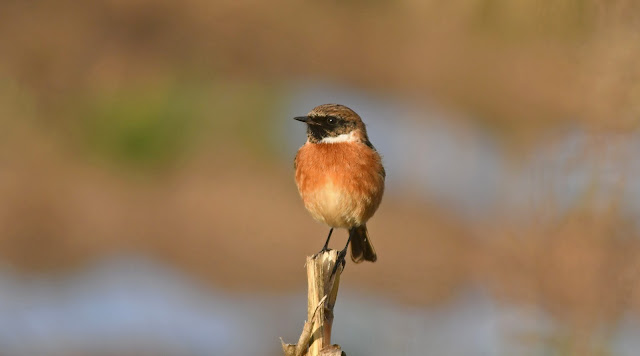 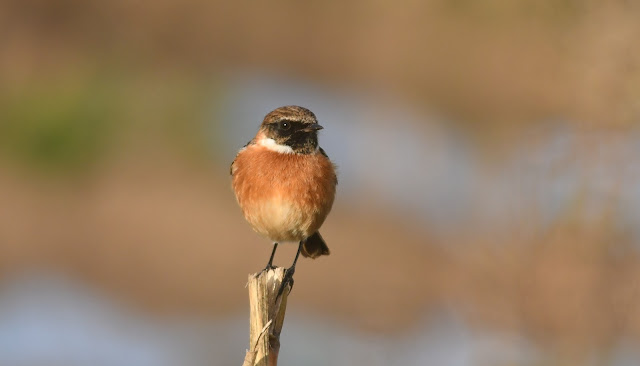 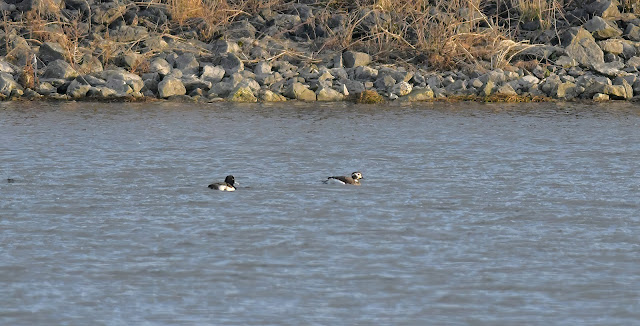 I headed up to Wallasey where there were reports of 5 Snow Buntings on the beach and dunes. When I arrived it was absolutely manic with people on the beach. I thought there was no way they'd still be around, but these were the most tolerant birds ever. They just took off and later a few feet away each time they were disturbed. Gloomy light by this time unfortunately, so the shots are not too good.
Snow Bunting 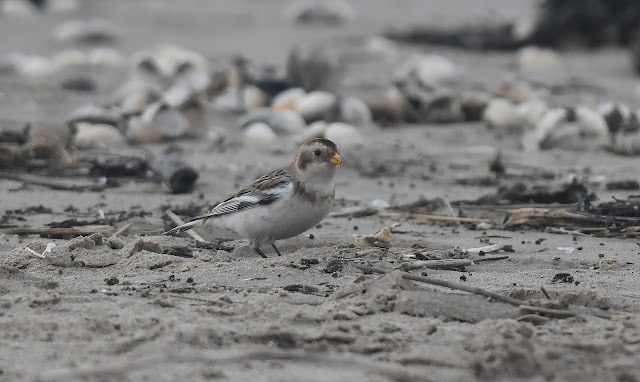 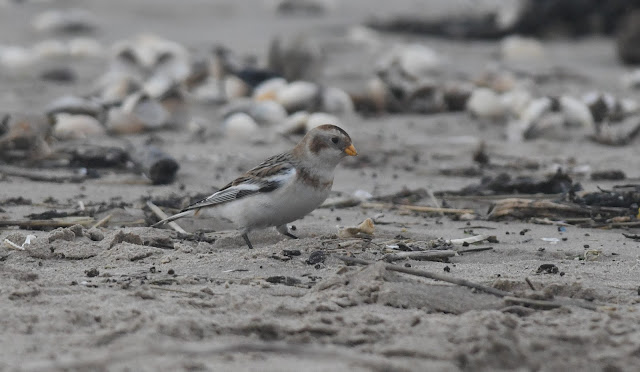 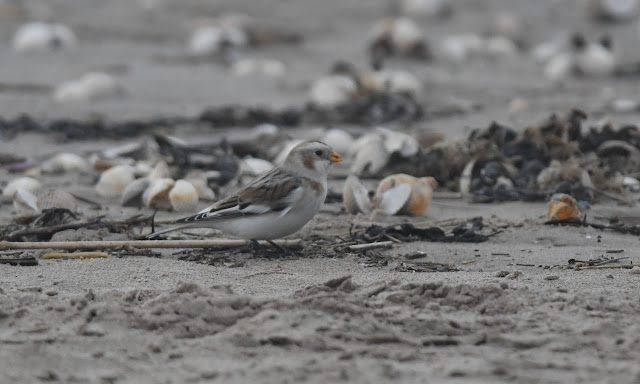 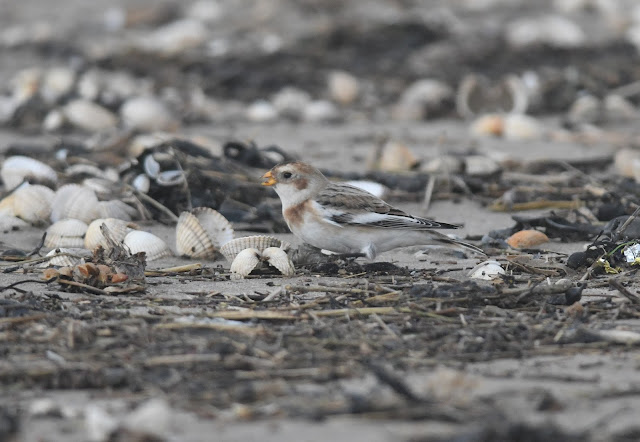 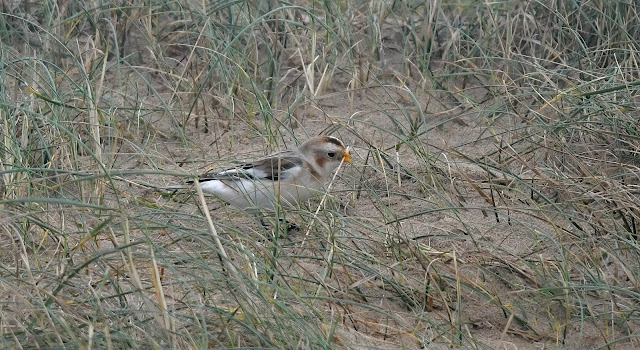